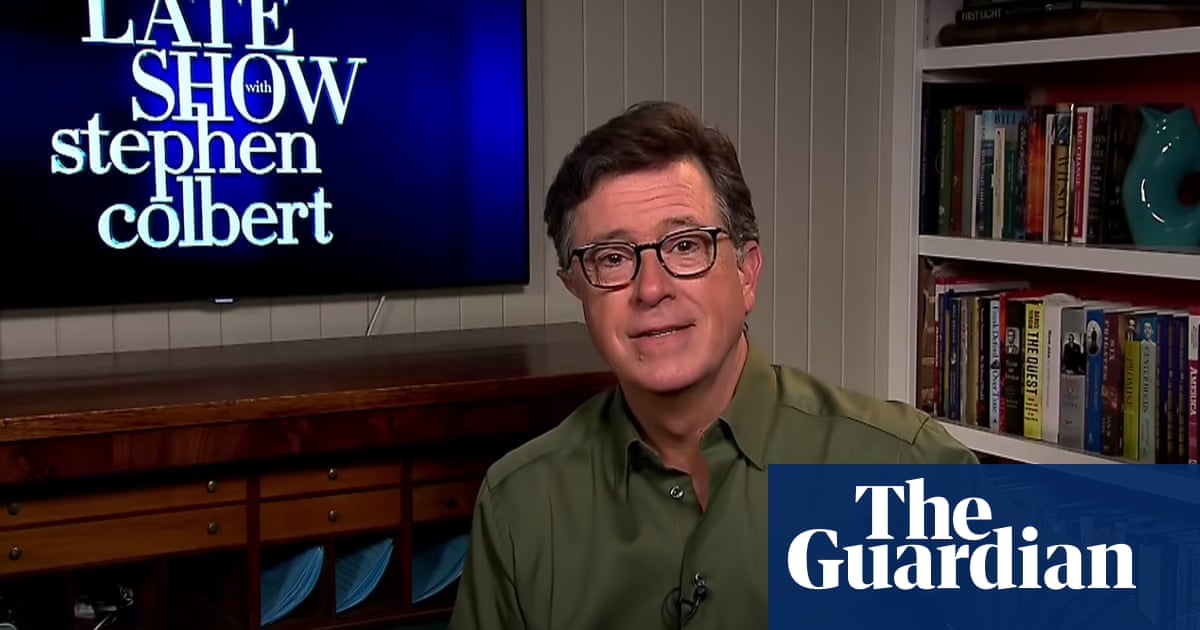 On Thursday’s the Late Show, Stephen Colbert recapped Donald Trump’s visit on Thursday to a Ford plant in Ypsilanti, Michigan, for which the Michigan attorney general wrote a public letter asking the president to abide by the rules and wear a mask. The letter explained that “anyone who has potentially been recently exposed, including the president of the United States, has not only a legal responsibility, but also a social and moral responsibility, to take reasonable precautions”.

“OK, you lost him at legal … and social … and moral … and responsibility … and ‘wrote a letter’,” said Colbert. “Next time, try delivering your message via sock puppet with a nice set of cans.

“So would he, or … oh, of course he wouldn’t,” Colbert continued over footage of Trump, sans mask, touring the factory. “Oh my God, what’s it going to take? Just fill it with Skittles and strap it on his face like a feedbag!”

Asked about his decision to not wear a mask, Trump said he did wear one in the back area but that “I didn’t want to give the press the power of seeing it.”

“He’s right, there would be enormous pleasure in seeing less of his face,” Colbert said.

On Late Night, Seth Meyers turned his attention to the government scandals overshadowed by the coronavirus pandemic, such as Republican attempts to suppress voting. Earlier this week, Trump tweeted a threat to withhold funding from Nevada and Michigan for mailing out voter applications, which is legal and which states have done for years, citing misleading and unproven “voter fraud”.

The brazen threat demonstrates how “just five months after he got impeached for withholding funding from Ukraine lest they interfere in the election and two months after he said governors who want help from the federal government have to treat him well, [Trump] just keeps using the same move over and over,” said Meyers. “It’s only a matter of time before he threatens to withhold funding from the post office unless they promise to look at every ballot and dump the ones for Biden into the shredder he uses for his tax returns.

Stephen Colbert: ‘A pandemic is not the best time’ to ignore the CDC

“And the Republican party is fully in lockstep behind Trump,” Meyers continued. Despite the pandemic and cratering economy, “they’re transforming the Senate into an arm of the president’s campaign”. The Senate judiciary committee, led by Trump ally Lindsey Graham, is moving forward with an investigation into the origins of the Russia inquiry, which will target Obama-era officials, and the homeland security and governmental affairs committee voted to subpoena documents in an investigation of Hunter Biden – “the same investigation Trump got impeached for, and Republicans are fine with all of it”, Meyers said.

“You might get a little grumble from Mitt Romney, and Susan Collins might form a committee to look into the possibility of furrowing her brow, but otherwise the GOP is down with all of it. They’re like bank robbers who get caught planning a heist and say: ‘Eh, should we just do it anyway?’”

On the Daily Show, Trevor Noah discussed the disastrous flooding in central Michigan caused by two broken dams. “This is horrible,” he said, “and I feel so bad for the people who have to flee their homes during a pandemic. Now when you’re loading up the car, you have to choose between your photo albums and your toilet paper.

“What really sucks is this administration has been talking about fixing America’s infrastructure for three years now, but the only thing they’ve really worked on is the border wall,” Noah continued. “People of Michigan should just tell Trump that Mexicans live in the water, and then they’ll rebuild those dam walls in no time.”

In other news, the actor Lori Loughlin, who played Aunt Becky on Full House and was implicated in last year’s college admissions scandal, will plead guilty to conspiracy charges for paying to fraudulently win her daughters’ way into the University of Southern California. After insisting she was innocent for a year, Loughlin and her husband are changing their tune, “which just shows you how sick people are of being locked in their homes with their families”, said Noah. “Two months of corona, and she was like: ‘Actually, your honor, I’m guilty, just take me to prison.’”

On the other hand, it’s a “genius time to plead guilty to any crime”, he said, because coronavirus mandates keeping people out of prison. And “knowing Aunt Becky, she’ll probably pay someone to fake her coronavirus test for her”.

And after Trump claimed to be ending his use of an anti-malarial drug as an unproven coronavirus treatment, Jimmy Kimmel recapped a week of hydroxychloroquine headlines. “It’s pretty clear what’s going on here, right? [Trump] blurted out that he was taking it just to trigger the news media – successfully, by the way – even though there’s no way in hell he’s taking this stuff,” Kimmel said. “You think any White House doctor, even a Trump doctor, is going to give the president a pill that could stop his heart just because he asked for it? Of course not. What if he asked for mushrooms? Will they give him those?”

Trump claimed he’s going “off” hydroxychloroquine in two days “when his regimen runs out”, which is “not how that drug is taken”, Kimmel explained. “It’s not an antibiotic. There’s no regimen.” It’s taken prophylactically, as in you have to keep taking it. “Like condoms are prophylactics – you don’t use them for two weeks and then go, ‘I think we’re good, honey,’” said Kimmel.

“He never took hydroxychloroquine,” concluded Kimmel. “You know how you know this is a lie? It came out of his mouth.”